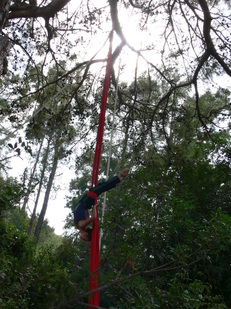 Annelien is a dancer and aerialist 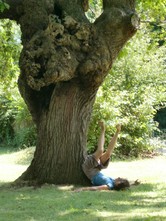 After graduating from Royal Balletschool Antwerp in Belgium (2012) she started training aerial skills in corde lisse, silks, ring and vertical dance in harness. Since then she has been working with contemporary dance, improvisation, aerial and vertical dance (since 2004/05), Body Weather-Butoh (since 2009) and has worked as a freelance performer in Belgium, the Netherlands, England, Copenhagen, Los Angeles, ... and with the Canadian Caravan Stage Barge Theater she worked throughout 2006, '07 and '08 as performer and aerial choreographer on their European tours and again as choreographer in 2012.

A few opportunities have risen to make own work in collaboration with musicians and other artists, film, technical wizardry and fire, always within a set frame, such as Bodyweather Lab in Los Angeles, Proeftuin in the Netherlands and others. New work also consisted of choreographing for other artists such as Karavana(2011), NL and Apocaliptic Circus, UK (2013).

In the last few years Annelien has been studying shiatsu at the Lifeforce academy in Kessel, BE (2012, '13, '14, '15) and is currently finishing her thesis.
She will soon start a practise as shiatsu therapist in Brasschaat, her hometown in Belgium.
A new website with more information is under construction.